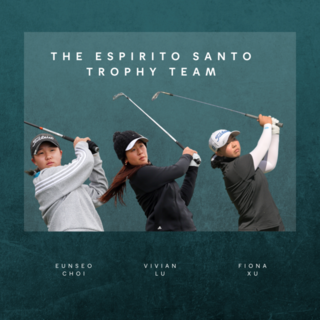 An already-proven team has been named to represent New Zealand at the 29th World Amateur Teams Championship to be held at Le Golf National and Golf de Saint-Nom-La-Brèteche in France.

Vivian Lu (Royal Auckland & Grange), Fiona Xu (Titirangi), and Eunseo Choi (Takapuna) will compete for the Espirito Santo Trophy from August 24 – 27, 2022, and will look to go one better than New Zealand’s best finish of runner-up in 1982 and when we hosted at Russley Golf Club in 1990.

The three women solidified their spots in the side following their runner-up finish at the 42nd Queen Sirikit Cup in May.

Lu was in the hunt for the individual honours after three rounds, ultimately finishing 13th. She’s been in formidable form in 2022, becoming the first woman in 27 years to defend her New Zealand Women’s Stroke Play Championship.

Her Auckland teammate Fiona Xu has also been in some career-best form, finishing tenth at the Queen Sirikit Cup. Earlier in the year, she followed in her idol Lydia Ko’s footsteps by winning the Australian Women’s Amateur by three shots at 11-under-par at Cranbourne Golf Club.

Choi will wear the fern for a second time after a solid debut at the Queen Sirikit Cup, where she finished 18th. This year, she’s had victories at the Danny Lee Springfield Open, North Island Age Groups, Lydia Ko Age Groups, and a second-place at the New Zealand Stroke Play.

The event will be contested over 72-holes of stroke play, with the best two of three individual scores counting toward the team score.

New Zealand finished runners-up in 1982 and 1990 when New Zealand hosted the event at Russley Golf Club.

The 2020 World Amateur Teams Championship was cancelled due to COVID-19.