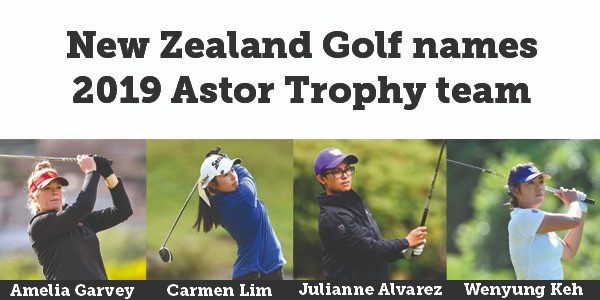 New Zealand Golf has named a mix of youth and experience to play for the Astor Trophy in Canada in August.

Formerly known as the Commonwealth Tournament, the Astor Trophy is contested every four years between teams of top women amateur golfers from Great Britain and Ireland, Australia, Canada, New Zealand and South Africa. The format is two foursomes and four (previously five) singles matches each day.

Gregg Thorpe, High Performance Manager of New Zealand Golf believes the tournament presents a great opportunity for two of the younger players in Lim and Garvey to spend some time with two of the most experienced, Keh and Alvarez.

“This is a very unique event, it only happens every four years but it’s one all the players want to play,” said Thorpe.

“They get to test themselves against some great nations from the North as well as some of our better-known Southern Hemisphere counterparts.”

New Zealand, who has finished runner-up five times, has never won the Astor Trophy, but this team will head to Canada looking to go one better this time round.